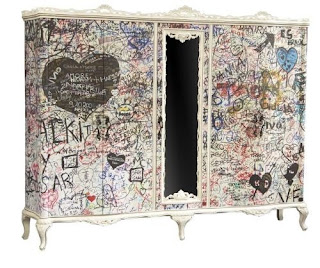 
I was never allowed to take art classes in school - not to worry I make a living as a creative now -so when my parents gave "the kids" our own room in our unfinished basement it was as if I had my first orgasm -  I called it The Punk Room.  The Punk Room was a box of unfinished concrete, it had a black plastic tarp doorway, a black light and enough neon highlighters for every neighbourhood kid and their cousin.  I covered the walls in graffiti and had a forgotten about pastel Oriental rug on the floor. It was 1984 and I was inspired by everything "out of the ordinary" particularly goth hair and men wearing eyeliner in British bands...

Inspired by the graffiti in Verona, Italy, Anna James has transformed 20th Century furniture into contemporary works of art.

I think her pieces in Verona and Romeo and Juliet are fabulous and I'd love to see them in a boutique hotel.

Inspirational seating - The bench at Viretta Park, aka Kurt's Park in Seattle (the park next to Kurt Cobain's home). 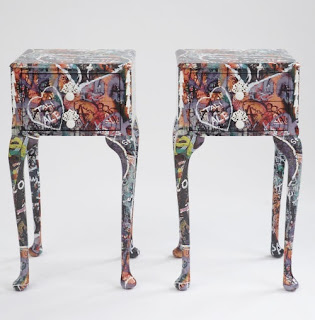