May 23, 2008
'Go, play outside!'; is what my mom used to tell us.
I grew up in Langley, BC surrounded by land, grasses, trees and wildlife. It's heartbreaking to see what's happened to Langley now. There's goes the habitat.
We built some of the best forts or, shall I so boldly say, earth integrated architecture, in Langley. My favourite was the 'Moss Fort'. The Moss Fort was a grouping of huge smooth granite boulders that formed somewhat of a circle - these were the walls. The roof comprised low hanging alder and cottonwood branches and we were the only kids to have a shag carpet of moss - you had to take your shoes off before you came in the Moss Fort. You couldn't stand up in the Moss Fort, but that was okay because the low roof, moss insulation, granite and body heat kept it warm. It emitted a quiet yet powerful energy. It was protected from the adults, of course, by salmonberries and thistles.
The Moss Fort was silent like a womb and a place to go for peace. 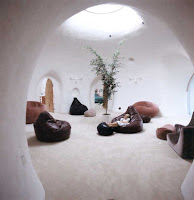 William Lishman - underground architect - has taken the Moss Fort concept further with his underground home in Ontario. Lishman, who is receiving an Honorary Doctorate from the University of Ontario Institute of Technology in June, has been living in his home for seventeen years with 'surprisingly few problems for a design so radical..'.

Malcolm Wells, a Cape Codder, is more than an 'activist' for earth sheltered architecture. After 10 years of spreading 'corporate asphalt on America in the name of architecture...' he woke up and realized the land was alive. Wells' gas station and parking lot concepts are something well worth looking at.

Although not known as an earth sheltered architect, Arthur Erickson did a stunning job on Robson Square in Vancouver. Having grown up carousing with skateboarders downtown, I'm quite familiar with the comfortable communal gathering space Robson Square evokes. From the street it is unnoticeable but when you're in it, it's a quiet green refuge - like my beloved Moss Fort.
(photo Terri Meyer Boake)
architecture