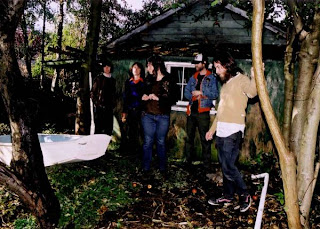 image Black Mountain
I have a love hate relationship with the city of my birth. When something or someone I'm fond of, which wouldn't be Gortex, 'super groups' or over priced mediocre restaurants, gains momentum I'm proud to be a Vancouverite again.
It's taken Black Mountain awhile to break it on the East Coast, but only because they're living in West Coast time. Muzzle of Bees has ranked them amongst the top 12 concerts of 2008, above Sigur Ros and The Boss but just below Fleet Foxes and Bon Iver, and Ryan Matteson classifies In The Future (which would sound even deeper on vinyl) as one of the records that without a doubt 'really monopolized my listening habits'.
Nominated for the 2008 Canadian Polaris Prize and CBC's Best Advice from an Artist and Best Hook, Black Mountain should hurry up and change their watches to Eastern Time Zone for 2009.
Watch the video from the 2008 Polaris Music Prize here or watch Wucan here.
Related Posts:
Flannel Shirts And Fleet Foxes
Yes, you Can
Andy who?
May I Introduce You To...
music vancouver